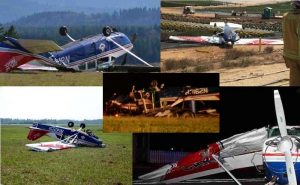 The Civil Air Patrol (CAP) is a taxpayer supported 501(c)(3) non-profit corporation that attempts to serve as a “benevolent” civilian auxiliary of the U.S. Air Force. Under a command structure of volunteers of limited qualifications and self-serving integrity, CAP attempts to perform three key missions: emergency services, to include search and rescue and disaster relief operations; aerospace education for the general public; and pre-military cadet training programs for teenage youth. This worthy objective is a failure in implementation with widespread problems of systemic corruption and safety concerns.

This information is methodically suppressed from candidate members and cadet parents.

AuxBeacon News is unaffiliated with the Civil Air Patrol or the U.S. Air Force and its academy. Its contributors are those who have suffered increased risk in the air, property damage, physical or verbal intimidation, sexual assault and whistle blower reprisal by either or both of those organizations. Current contributors seek open accountability and corrections. We are not disgruntled terminated members, but a growing network of members, retired and former members who are taking a stand to stem the corruption.

The simple fact is that the news is the news, regardless of who may not like the news. And, we will continue to report the Air Force and Civil Air Patrol news, and follow stories of interest to our readers, wherever those stories might lead.

AuxBeacon is not a satire, parody, lampoon, fake news or humor website. Our mission is to aggregate the truth of what has already been reported with new findings because we seek an end to the fraud, waste, abuse, concealment and reprisals against innocent members. Contributors to this cause seek reform from top to bottom with transparency and accountability to foster servant leaders of integrity. Here, members and taxpayers are provided a channel for their voice without fear of reprisal.

Tell us Your Story

You may submit any truthful claims and supporting evidence that you have on corrupt or abusive practices and personalities within these two organizations. You should advise if your claims and evidence may or may not be published or if you merely require anonymity.

In the past, Civil Air Patrol has provided evidence of its corrupt command practices through releases of its own Membership Action Review Panel Reports. Required by its constitution and regulations, these reports have detailed harassment, retaliation and the reversal of member terminations that improperly served to discredit those reporting fraud, theft, waste, cadet molestation and other abuses.

AuxBeacon will not publish aggressive statements without corroborating evidence. Defamation is the communication of a false statement that harms the reputation of an individual person or group. It has been a tool of current and past commanders in the program. AuxBeacon will not engage in this behavior and will revise or remove stories if based on fabricated or false corroboration. If your contributions are provably true, and you have authorized their publication you may expect to see them in the near future after they have been evaluated by our growing network of fact checkers.