By Tom LaVenture | The Garden Island

LIHUE — The Kauai Composite Squadron of the Civil Air Patrol is experiencing a drop in numbers and volunteers who left are saying its ability to carry out emergency services and tsunami watch missions is in peril.

The Kauai CAP received squadron of the year recognition in 2013, along with top mission pilot and aerospace education officer. Since then, the number of volunteers has fallen to 40 from 120, and the number of mission-ready pilots has fallen to three from 18, according to members who have moved to inactive or patron status or have left outright.

“I don’t know what is really going on, but all of the islands are having issues,” said Nelson Garcia, a volunteer who went on inactive status.

Kauai CAP Commander 1st Lt Charmine Reyes said Monday she could not comment without approval from the state wing.

Volunteers are saying the state wing has strong-armed an updated vision for the squadrons and has forced out the old guard. Several have written letters to the regional and national CAP to ask for an investigation. Some members blamed Lt Col Jeff Wong, Hawaii Wing Commander since March 2013. Another member described the state and local leadership as a “power play.”

Dr. Michael Bailey, a Lihue dentist and CAP pilot, joined four years ago but placed himself on inactive status recently until the situation resolves itself. The environment has changed from problem solving to people blaming, he said, with issues pertaining to strong personalities and not operations.

“It is a great organization that has hit some rough water lately,” Bailey said. “I stepped out while that brouhaha went on and when it resolves itself, I will step back in.”

Vice Commander Lt Col Carswell Ross of the Hawaii Wing said lessons from 9/11 showed that agencies working independently on the same situation were not communicating. Today, CAP must perform within a larger perspective as a military auxiliary in support of Civil Defense, Homeland Security and the U.S. Air Force.

“People in general don’t like change and especially change that is created at the top and pushed down, but it is a system as opposed to a person,” Ross said. “We have to get used to operating in this new environment. We can continue and we can all hopefully get together instead of pulling away and floundering.”

Lt Reyes replaced Ron Meretillo, who resigned in December after one year.

Victorino remains in patron status as an active member. Although he would not speak to the controversy, he said he would serve again to keep the unit from falling apart.

“It’s a great auxiliary organization,” Victorino said. “There is definitely a mission for Kauai and Hawaii. We do an awful lot.”

Members have corresponded with the regional and national CAP command requesting that Caires and Victorino be reinstated.

Ross said the volunteers need to see the CAP like the Red Cross, or police and fire units. They all operate under the same rules, he said.

“This is a transition time and I think that we are at a critical point in terms of feelings within the organization,” Ross said. “I hope that people will feel the need to come together for the need of the organization and set aside the personalities.”

“There has been some turnover in the organization lately, and our Civil Defense staff has been in dialogue with CAP regarding these changes,” Tokioka said. “As with all agencies with which we partner, we work closely with them at all times to ensure that we are all ready to respond when an emergency situation arises.”

Three of the 10 CAP planes in the state are based at Lihue Airport. Just a year ago, volunteers say there were 18 pilots to fly the Kauai missions, along with support for the Maui and other squadrons that were short pilots.

“Kauai has a significant number of pilots that were able to provide coverage for other locations,” Ross said.

Volunteers say there are fewer than three CAP pilots on Kauai today. The rest have left, or are not certified for criteria and regulations that pertain to the positions they hold including flying over water and water survival.

Another issue is the state wing intends to move planes around between the squadrons depending on flight hours, maintenance schedules and pilot training. This upset the commanders most, say volunteers.

“The plane shuffling is a concern,” Ross said. “We are working as hard as possible to correct some of these problems on each island.”

The following memo has been sent to all Hawaii Civil Air Patrol Members in the wake of controversy over organizational shakeups [and to silence the whistle blowers]: 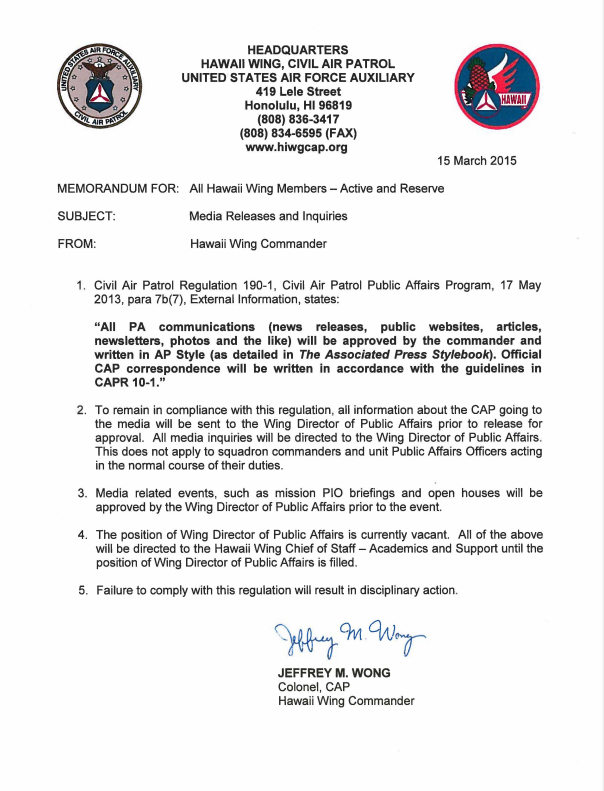 Be first to comment on "A Civil War in Hawaii Wing"